下载MP3到电脑  批量下载MP3和LRC到手机
;;sQiIS~Gj955vAKq3Through good times and bad over the last two years, my passionate beliefs that such a deal is attainable, that a bright future lies ahead for our country has not wavered. And it is now within our grasp. I spent yesterday meeting Chancellor Merkel, Prime Minister Rutte, President Tusk and President Juncker, to address the concerns that MPs have with the backstop and we are making progress. I was due to travel to Dublin this afternoon to continue that work, but will now remain here in London to make the case for my leadership with my parliamentary colleagues. A change of leadership in the Conservative Party now will put our country's future at risk and create uncertainty when we can least afford it. A new leader wouldn't be in place by the 21st January legal deadline. So a leadership election risks handing control of the Brexit negotiations to opposition MPs in parliament.
K!g0qS%aNwJ 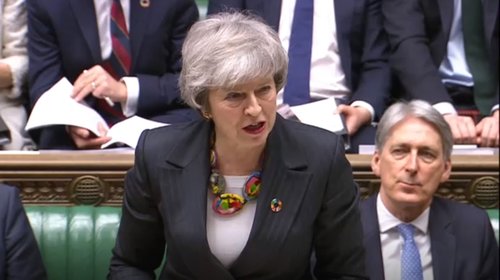 The new leader wouldn't have time to renegotiate withdrawal agreement, get the legislation through parliament by the 29th of March. So one of their first acts would have to be extending or rescinding Article 50, delaying or even stopping Brexit when people want us to get on with it. And a leadership election would not change the fundamentals of the negotiation or the parliamentary arithmetic. Weeks spent tearing ourselves apart will only create more division, just as we should be standing together to serve our country. None of that would be in the national interest. The only people whose interests would be served are Jeremy Corbyn and John McDonnell. The British people want us to get on with it and they want us to focus on the other vital issues that matter to them too. Building a stronger economy, delivering first class public services and the homes that families need. These are the public priorities and they must be the Conservative Party's priorities too.