JUDY WOODRUFF: Finally tonight: a milestone moment. Two American astronauts, both women, stepped out of the International Space Station for the first all-female space walk. William Brangham has more on this landmark day.

WILLIAM BRANGHAM: The moment Christina Koch and Jessica Meir began to exit the International Space Station, floating out into space 250 miles from planet Earth, history or herstory was made.

WOMAN: Right beneath your feet, so don't move down.

WILLIAM BRANGHAM: Men have been on every single space walk, all 420 of them, until today. Koch and Meir's mission was installing lithium ion batteries to replace the station's battery charger.
Today, President Trump called the two astronauts from the White House.

DONALD TRUMP, President of the United States: What would you like to tell everyone listening and watching today, especially young women?

JESSICA MEIR, NASA Astronaut: We recognize that it is a historic achievement. And we do, of course, want to give credit to all those that came before us. There's been a long line of female scientists, explorers, engineers and astronauts. And we have followed in their footsteps to get us where we are today. 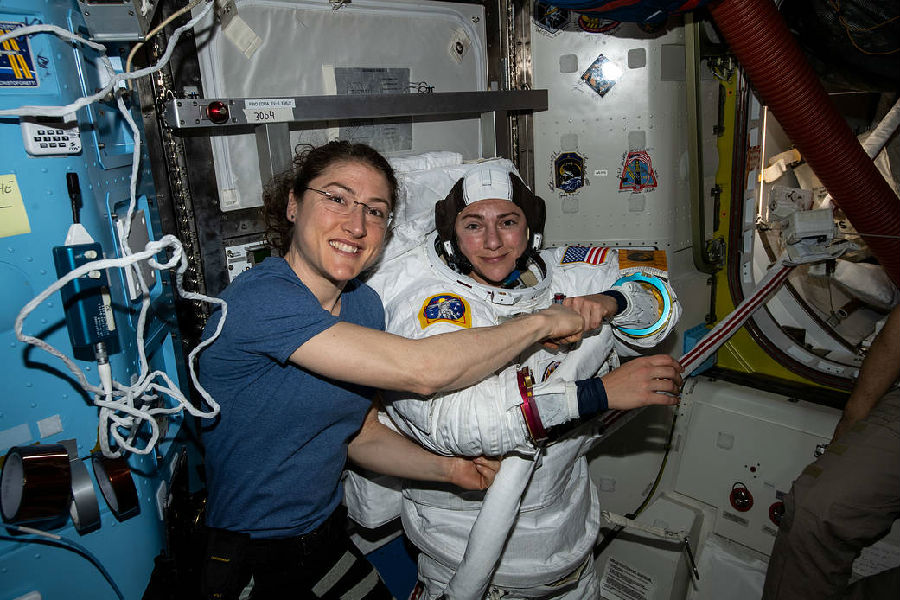 WILLIAM BRANGHAM: Today's milestone comes months after the first all-female space walk had originally been planned, but that was scrapped when NASA revealed that it didn't have a second spacesuit that would fit a woman. Saturday Night Live had some fun with that one:

ACTRESS: I'm not mad. You know, they can make a special spacesuit for a dog...

ACTRESS: ... or a special spacesuit for a monkey. But a human girl? Only one gets to be moon queen.

WILLIAM BRANGHAM: The first woman to walk outside a spacecraft in orbit was Russian cosmonaut Svetlana Savitskaya. That was back in 1984. This was Meir's first space walk. She's now the 15th woman to do so. She spoke ahead of today's historic mission.

JESSICA MEIR: What we're doing now shows all the work that went in for the decades prior, all the women that worked to get us where we are today. And I think the nice thing is, for us, we don't even really think about it on a daily basis. It's just normal. We're part of the team.

WILLIAM BRANGHAM: For Koch, this was her fourth space walk. She's now scheduled to spend 328 days aboard the space station, the longest ever by a woman.

CHRISTINA KOCH, NASA Astronaut: That, in the past, women haven't always been at the table. And it's wonderful to be contributing to the human spaceflight program at a time when all contributions are being accepted, when everyone has a role.

WILLIAM BRANGHAM: Both Meir and Koch were selected as part of NASA's 2013 class. That was NASA's first class to have an equal number of male and female astronauts. NASA says it hopes to put the first woman on the moon by 2024. And, this week, they very publicly unveiled that mission's female-friendly spacesuit. For the PBS NewsHour, I'm William Brangham.

JUDY WOODRUFF: You got to love it. We're celebrating.