Now, the VOA Learning English program, Words and Their Stories.

Has there ever been one issue that has caused trouble between you and another person? You know, a troublesome issue in your relationship, one that does not seem to go away?

If so, you and the other person have a bone of contention.

A bone of contention is the cause of a long-standing argument.

The website Dictionary.com says this expression was first used in the early 1700s. This expression comes from the fact that two dogs would often fight over a bone, with neither animal wanting to give in to the other. 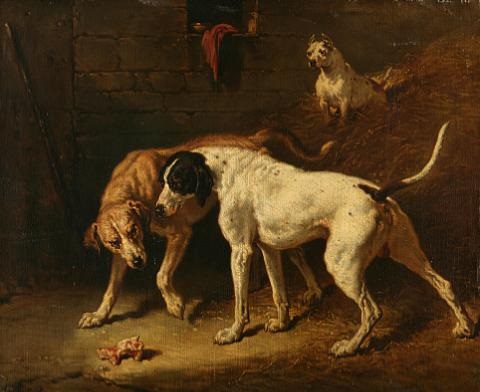 Now, another expression related to bone of contention that also uses the word "bone," is to have a bone to pick.

Let's say you have a problem with someone and you want to resolve it. You could say to them, "Look, I have a bone to pick with you."

This expression refers to a dog chewing endlessly on a bone. It picks it clean. So, a "bone to pick" is a subject or issue that may take much discussion to resolve.

"Bone to pick" is very common and informal. "Bone of contention" is also common but can sound a little formal. A more informal way to say "bone of contention" is sticking point. This is a problem or issue that you can't move beyond. It stops all progress. You're stuck.

A sticking point is similar to holding a grudge.

When you hold a grudge you keep bad feeling toward someone who has done something bad to you in the past. Two people can also hold a grudge against each other. You might also hear that someone bears a grudge. But holding one is much more common.

Now, a more expressive, yet less common, phrase is apple of discord. An apple of discord is an object or issue that can cause anger, arguments and even rivalry between people.

This expression comes from Greek mythology. The ancient myth goes something like this:

Once there was a great ceremony to celebrate the marriage of Peleus and Thetis. All the important gods and mortals were invited. However, Eris, the goddess of discord and unrest, was not. She really shouldn't have been surprised. I mean, really. Who would want to invite the goddess of discord to their wedding?

Well, to cause trouble, Eris threw a golden apple into the crowd. Written into the apple were the words "the fairest," "or most attractive" or something like that. Now, who wouldn't want to catch that?

Well, it turns out that three other Greek goddesses wanted that golden apple. Aphrodite, Athena and Hera all claimed it should be for them. Zeus, the King of the gods, stepped in to resolve the disagreement. He ruled that Paris, a Trojan prince, would act as judge.

The three goddesses all tried to influence Paris, which led to a series of terrible events. Very simply stated, the apple caused so many arguments that it eventually led to the Trojan War.

Speaking of weddings, here in the United States, there is a tradition at some. Immediately after the ceremony, the unmarried women gather closely in a group. The just-married bride then turns her back to the them and throws her bouquet of flowers up into the air.

It is not a competition for the fairest or most beautiful woman to catch. But tradition says that whoever catches the flowers will be the next one to marry. So, it can sometimes lead to a big fight for the bouquet.

And that's Word and Their Stories. I'm Anna Matteo.

Do you have any phrases in your language that mean "bone of contention"? Let us know in the Comments Section!